Better check those estate sale closets again, because you might just be lucky enough to discover a vintage L.L. (Lean Leanwood) Bean Inc. -heavy canvas “Boat and Tote” bag,  which are currently the latest rage to own.
The vintage ’80s, patriotic (red, white and blue) “boat and totes” are selling online in the range of $200 to $350,  based on condition and current buying trends.
Some tote types-like the vintage ’60s totes with cursive script lettering on the label- can sell as high as $500 if found in mint condition.
​The L.L. Bean canvas bags were made in the U.S.A with quality materials.
​​​I have two “boat and tote” handbags, my mother purchased for me from one of their stores in Maine back in the 1980s. in fact, I still have them today, and they’re in great condition. I don’t believe I would ever want to sell them though. They might bring in a couple hundred dollars for the pair, but I would never give away a gift from Mother. 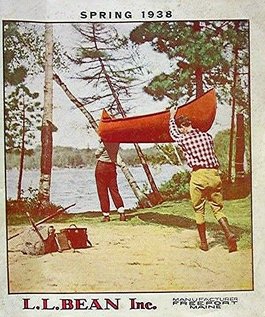 L.L. Bean History
L.L. Bean started the business in 1912, from the basement of his brother’s apparel shop in Freeport, Maine.
As an avid outdoorsman, Leon wanted to create a boot specially for hunters and fisherman when walking in the forests of Maine. Ultimately, he came up with -The Maine Hunting Shoe.
Unfortunately, the first batch of of his leather and rubber combo boot/shoes had some flaws, but Leon addressed these issues and he continued to promote his products by mailing brochures out to local outdoorsman-which was a great way to advertise.
​Within a short time, word was out about his companies outstanding customer service and quality products.
By the 1920s, more people were camping, fishing and hunting in Maine, and the L.L. Bean Company grew tremendously. In 1934, the company came out with a 52-page catalog, and by 1937 the company had reached one million dollars in sales.  The customer was so important to L.L. Bean, eventually he opened his flagship store in Freeport, Maine in 1951. The stores’ doors remaining unlocked and open to the public- 24 hours a day, and 365 days a year. (Now that’s customer service!)
Boat and Tote Bags
The original tote bag was introduced in 1944 and called Bean’s Ice Carrier. It was actually made to carry ice between car and ice chest. It is said, the builders’ canvas material used to manufacture the tote, can hold up to 500 lbs. (It can sure hold a lot of groceries.)

Did you know, the L.L. Bean brand became so huge, that in 2012, they came out with their very own roving, road-ready “Bootmobile?” The vehicle is a replica of the L.L. Bean iconic boot.  It measures 13-ft-tall x 20-foot-long. (I would sure get a KICK out of driving this vehicle!)
You might just catch a glance of it when traveling across America.
​ 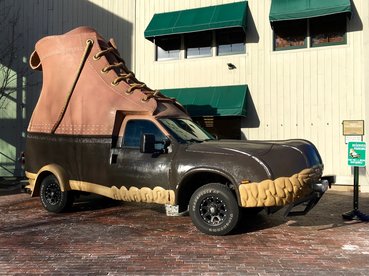 Today L.L. Bean merchandise is sold in their store outlets across America and via online e-commerce stores.  They have over 5000 employees and the business is rated #15 by Forbes Magazine.
“Not to bad for starting a product in his brother’s basement.”
​