In 2007, The Guide to Marvel Silver Age Collectibles, a book by J. Ballman was released to the public. This guide gave recognition, to the first licensed Marvel product from the Silver Age to be the Amazing Spider-man Ben Cooper Inc, Halloween costume. The costume is the earliest Marvel licensed product, and extremely valuable. The rare 1963, Ben Cooper-Marvel Spider-man costume can sell for over $10,000 to avid Spider-man collectors (only a few were made with the 1963 copyright date). Over the years, Ben Cooper Inc, created an assortment of Spider-man Halloween costume types, and most aren’t quite this valuable. The costumes designed after 1965, can maybe fetch over $200, if found in excellent condition and with their original box.

It’s the pre-1965 Spider-man Halloween costumes, which are highly sought-after today. (Note any copyright dating found on the side of the Ben Cooper box, additionally, marked on the lower right side of the thin fabric costume.)

Be careful, though, and do your homework; there are other key Spider-man costume dating identification guidelines to consider when discovering a Halloween treasure trove..

Ben Cooper Inc-was a leader in the Halloween costume manufacturing market. He started cashing in on the Halloween holiday in the 1930’s with the firm A. S. Fishbach, Inc, which had a license to create costumes based on Walt Disney Company cartoon characters, such as Snow White, Mickey Mouse, and Donald Duck. In 1942, the two firms merged into -Ben Cooper Inc. During the next decade, generic/typical Halloween monster character costumes were manufactured (e.g., witch, skeleton, devil, ghost, Frankenstein).

Into the ’50s, TV personalities and cartoon character costumes became popular-Phantom of the Opera, Davy Crockett, Little Orphan Annie, Casper the Friendly Ghost, Woody the Woodpecker, Raggedy Ann, and lets not forget the superheros-Superman and Spider-man. These costumes were sold in a windowed box for a little over a dollar at department stores. Each featured a thin rayon or vinyl fabric outfit-which was worn over your clothes, and a matching plastic character mask with holes for the eyes, mouth and nostrals. Parents were concerned for safety walking at night with their children so Ben Cooper added “Glitter Glo” body costumes. The blue glitter was glued to the fronts on the costumes, which would reflect the oncoming motor vehicle headlights.

Literally hundreds of fictional Halloween masquerade costumes were created in  the ’60s through the ’80s from the Ben Cooper Inc., Collegeville, and the Halpern (Halco) Manufacturing Companies.

Those super-hero comic book character costumes still rule today, but who came up with the idea for one of the most adored comic book superhero- Spider-man? Was the concept for- The Amazing Spider-man conceived in 1954 by Ben Cooper Inc., as a Halloween costume character, or was it the brainstorm design of Stan Lee and Steve Ditko of Marvel Comics.

Spider-man did make his first appearance in the Marvel comic book Amazing Fantasy #15 in Aug, created by Ditko and Lee, but where did their inspiration come from?

It’s rumored that Mr. Jack Kirby, of the ’50s short-lived comic book company, Mainline Publications- who was an innovative writer, editor and artist -had freelanced the Spider-man costume idea, which Ben Cooper Inc. released in stores in 1954. Jack Kirby and Joe Simon- probably due to financial difficulties-submitted costume character ideas to Ben Cooper Inc., for the upcoming Halloween season. Their company was located only a few miles from the Ben Cooper manufacturing firm in NYC. One such idea was a Spider-man character based somewhat from Kirby and Simon’s-“Spiderman”-“Silver Spider,” and “The Fly” concept they had thought of earlier in 1953.

Whether true or not, no one will ever know for sure. Marvel Comics 1962, Spider-man character did in fact, look very similar to Ben Cooper Halloween costume design, and Jack Kirby has stated he created the original Spider-man character. During the ’50s, Kirby had been involved in Timely Publications evolving to become-Atlas Comics (a decade later- a. k. a. Marvel Comics).

Nevertheless, in 1962, Marvel now owned the legal rights to the name “Spider-man” when they published their comic book. Ben Cooper Inc., had halted the production of their “Spider-man” costume, and then licensed a similar likeness of the Marvel character in the early’60s. In September of 1963, the very first licensed product from of the Marvel Comic Co. was released to stores in the form of a Ben Cooper, Inc.”Spider man” costume.

Ben Cooper was considered quite the smart business man, so why would he let his Spider-man idea go to Marvel Comics? Maybe a private deal was made between Mr. Cooper and Marvel’s publisher, Martin Goodman?  If you were to compare Stan Lee and Steve Ditko’s Spider-man design with the 1954 Ben Cooper’s Spider-man costume, you can notice resemblances. Steve Ditko had to have seen this costume at one time, being his company was close by.  This leaves us to wonder if he might have taken, borrowed, or was inspired by Ben Cooper’s Spider-man. After all, Steve Ditko was assigned to design the Spider-man character.

One way or another, Ditko had a terrific hit with Marvel’s Spider-man character. It was a win-win design for both the Ben Cooper and Marvel Comic Companies as the 1963 Spider-man Halloween costume came out around the time the Marvel, Spiderman comic book character was introduced.

Halloween costume memoirs from the ’60s

Back in the early ’60s-when I was five-years old- I remember my first Ben Cooper  masquerade Halloween costume. The plastic mask depicted a skull with a knife going through its head. (OK, I really didn’t want to have a skeleton costume, but the “Bewitched” costume was sold out.) 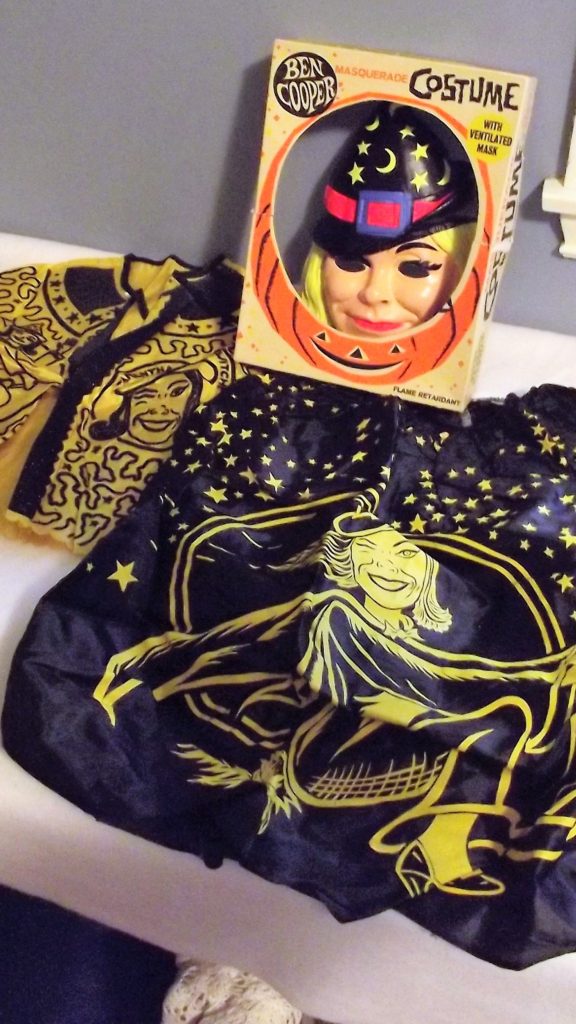 It was so exciting to visit the local five-and-dime store with my parents, and choose my own Halloween costume-not to mention-Trick-or-Treating!

So in closing, “Everyone have a safe-SPOOKTACULAR Halloween!”