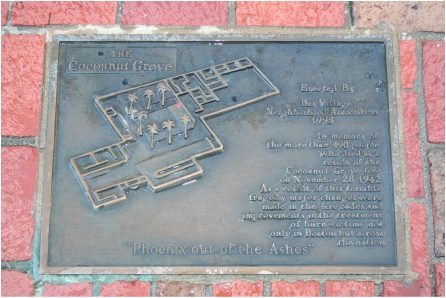 On  Nov 28th 1942, a huge fire occurred at the Cocoanut Grove Restaurant- Supper Club in Boston, Ma- with over 492 people perishing. The Cocoanut Grove was originally a speakeasy—an illegal bar during the prohibition time—unfortunately, some of its doors were bricked up or bolted shut so customers couldn’t leave the building without paying first.
The main entrance to the club had only one revolving door. There were flammable decorations throughout the building including cloth drapery on the ceiling and tall paper palm trees. The club had a licensed capacity of 500 people, and on the night of the fire there were about 1000 people in the building. One of the people killed from the fire was the famous Hollywood cowboy actor, Buck Jones (real name was Charles Gebhart). He died two days after the fire.
Did you know Buck Jones  was  a consultant for Daisy Ourdoor Products, which issued a Daisy “Buck Jones” model pump action air rifle. It featured a compass and a “sundial” into the gun stock, it was one of Daisy’s top-end air rifles, and sold well for several years (Red Ryder-didn’t have a compass or sundial like the movie “Christmas Story” stated.
It was believed a busboy lighting a simple match to see in the dark while replacing a light bulb, had started the blaze in the basement  fo the Melody Lounge-which was part of the building.
Within 5 minutes the basement was totally engulfed and many people died stacked up at the one stairwell. The exit door at the top of the stairs was bolted shut. The fire spread to the ceiling on the first floor, and totally engulfed it within another 5 minutes. Many people died trying to exit through the revolving door—pushing from both sides and preventing escape. Some diners in the restaurant never even had a chance to leave their seats, having been asphyxiated by smoke and toxic gases.
All of the above issues, had contributed to this terrible tragedy.
After 74 years, all that remains of the Cocoanut Grove fire near Piedmont and Church Streets; is a small plaque.
Arlington Street Station (Green Line) is nearest to the location. 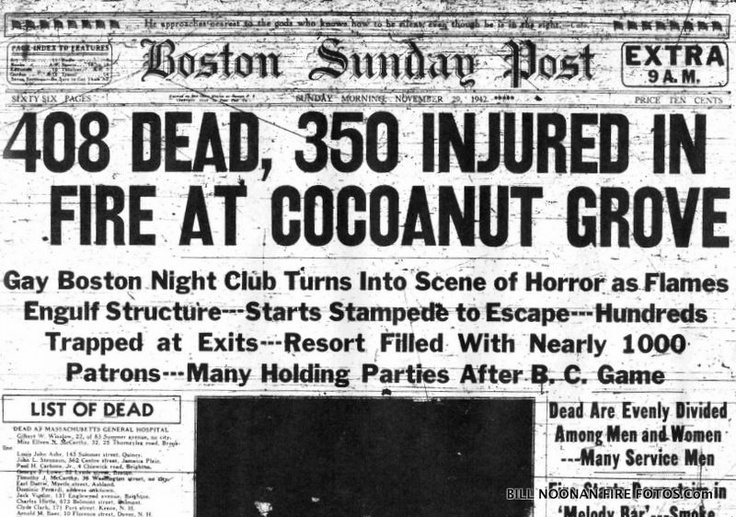