The year is 1947. The news has just spread concerning a small aircraft pilot (Kenneth Arnold) who had encountered unidentified disc/saucer-like, objects bouncing around the skies over Washington State.

Kenneth Arnold has en route to an air show in Oregon, and decided to also search for a downed Marine Corps C-46 transport airplane near Mt. Rainier. The plane had gone down in the same area recently, and after all, there was a $5,000 reward waiting for whoever spotted the wreckage. This is the area Kenneth told reporters, that he had observed several, unidentified flying objects-which seemed to be traveling at a high rate of speed (approximately 1700 miles per hour.) Yes, seeing these objects had given him an eerie feeling, but he figured what he saw may have been some type of experimental military testing.

It was the high rate of speed displayed by the flying objects, and how they flew together in perfect unison; which concerned Kenneth. At the time of the sighting, the UFO’s were traveling at a speed around three times faster than any known aircraft. The famous supersonic flight by Chuck Yeager wouldn’t happen until later that year.

The famous descriptive term “flying saucer” was not actually used by Mr. Arnold when he spoke to authorities, but instead, by an American newspaper editor or headline writer who had posted the Kenneth Arnold UFO sighting. Kenneth had simply stated the objects flew like- saucers skipping across water. (Unfortunately, he hadn’t had a cellphone to film his sighting.) There were no earlier 1947 statements he made, mentioning flying saucers or discs.

After this initial FIRST UFO sighting in June of 1947, over 800 other UFO sightings were reported in newspapers throughout the United States and Canada. Some were considered valid, and some were debunked-proven hoaxes.

Of course, military intelligence during this time, were a bit skeptical when hearing of Mr. Arnold’s UFO sighting; although, Kenneth was considered a viable witness. The authorities had questioned Kenneth continually, and he stated he had not had a moment of peace since sighting. Even though his explanation for using the term “flying saucer” has disappeared with time; the term had become a huge news media misquote in America’s history.  Additionally, it had become a commonly used phrase in mid-century households.

The “flying saucer” and alien phenomenon had began!

Since the late 1940’s, there has been literally hundreds of flying saucer depictions. Of course, Hollywood got on board with this new Space Age fascination, and thus the rise of extra-terrestrial-related movies; and TV series, such as Lost in Space-1965-1968, and My favorite Martian- 1963-1966. 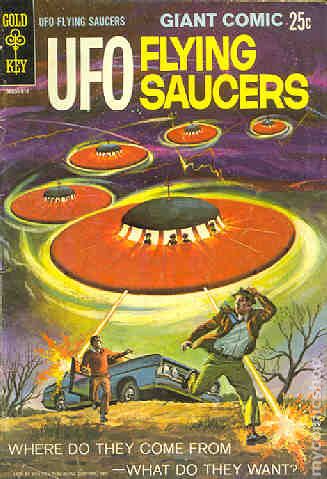 Here are some ‘flying saucer’ themed products manufactured during the mid-centuries Atomic Age.

Check out these funky Space Age fashions from the 1960s:

(Personally, I think the idea of UFO’s existing is a bit scary, but fascinating. Though, I don’t believe I would of worn any of these Space Age fashions from the ’60s.)

The items shown above are very collectible today. Moreover, any mid-century, Space Age-related object can be worth hundreds, or even thousands of dollars!

In my next article-Part II-I will discuss the origins of the famous flying saucer/spacecraft-shaped home dwellings called “Futuros.”

I leave you with this famous fun, martian tune we might remember from 1958: