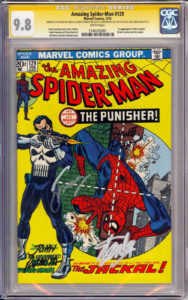 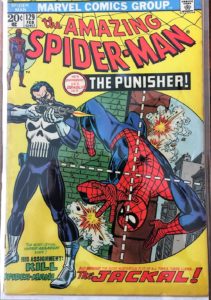 Can you tell which Marvel, Amazing Spider-Man comic book is the most valuable?

The first comic book photo has a high-CGC grading and is from Marvel’s 1st series (1963) of-The Amazing Spider-Man #129. This comic is the most valuable. High rating means: Big bucks!!

The second comic book is only worth $20. It is a 2004 reprint for Lion’s Gate movie promo giveaway-Note the upper right-hand corner to the cover is different.

If your a novice comic book collector, you wouldn’t be able to tell the difference, so before you spend a huge amount of cash to purchase a comic book believed to be collectible/valuable, make sure you do your homework.

The #129 Marvel “Amazing Spider-Man” comic book, Introducing the Punisher!” was first published in 1974. Additionally, reprints were published for the same comic in 2004 as a “Lion’s Gate Films Giveaway” movie promo for viewers who purchased a ticket for the “Punisher” starring John Travolta and Thomas Jane.

Notice on the second video how the person illustrating his new comic book, refers to numbers 6, 8 9; these are grade ranges certified by the CGC grading system. Also, he is speaking about some of the reasons the comic won’t receive a high grade (9 range), because of a small tear, fading, creases, and spine condition.

If you find a rare super-hero comic book, but it was many defects, it will undoubtedly bring down its value.

Watch for-creasing in the cover, spine separation, stains to the comic, fading-not glossy cover, dents, tears and hand-writing found on the cover and on the inside pages;and curled pages.

The most valuable comic books, have been CGC graded. Comic book collectors are perfectionists, so if you have found a comic you believe could be rare and collectible; please take the time to have it CGC graded. Also, once you sell it online, make sure you put cardboard in front of the comic book and on the back, and put into a plastic sleeve for protection when shipping.