First of all- what is a Golliwog?

No, it’s not related to a “pollywog” -which is a tadpole-its a funky-looking, but adorable, black minstrel-looking rag doll originally made by West African mothers for their children during the late 19th century.  The dolls made their way to the US and U.K. during the slave trade.

The Golliwog was used in the fictional storybooks created by Florence Kate Upton in 1895. Ms. Upton came up the Golliwog character from a Blackamoor minstrel rag doll her grandmother had given to her as a child, along with some wooden Dutch dolls, she had used as models.  The Golliwog became the main illustrated character for her first book “The Adventures of the Two Dutch Dolls” which was published in London by Longman, Green and Co.

The storyline is about the adventures and trials of two wooden dolls; Peg and Sarah Jane and the Golliwogg (Golly). Upton’s Golliwogg character was in fact, quite scary in appearance. He was a cross between a small black minstrel and a Raggedy Ann doll, but this, somewhat frightening Golliwogg character became a great hit with children in the U.K.  The Upton Golliwogg was adventurous, silly and lovable-which led to twelve more Golliwogg book volumes to be published.

The Golliwog books were the results of a mother-daughter team; Florence had a talent for drawing, so she became the illustrator and her mother, Bertha wrote the stories.

Unfortunately, the Upton’s didn’t copyright the idea for their Golliwog books, and the image entered into public domain territory where he became a common character in other children’s storybooks and toys. Unfortunately, the lovable black Golliwog character in books published later in the 20th century; was often depicted as hideous, unkind and mean.

During the mid-century, Golliwog’s characteristics became associated with racial stereotyping and insensitivity. Because of this, many books containing Gollies were removed from public libraries, and the manufacturing of anything “Golly” related, was discontinued. Ultimately, his popularity had all but diminished- but not with Golly collectors.

For almost a century, the huge British grocer brand “James Robertson and Sons Manufacturing, Limited” used a Golly character for advertising their jams and preserves. Ultimately, the company received negative attention because of its long-time use of the Golly, black-faced caricature. In 1988, Golly was removed from all TV ads, and eliminated from Robertson’s jar labels in 2002.

The well-known teddy bear company-Steiff- became the first toy company to mass produce and distribute Golliwog (changed from Golliwogg), dolls. Other notable German companies to produce Golliwogs were Schuco and Levin. In the U.K., Deans and Merrythoughts produced them.

Today Steiff Co. Golliwog dolls can sell for over $6,000, which makes them the most prized of all “Golli” collectibles.

Upton Golliwog books; stuffed toy dolls, postcards, penknives, jewelry and badges; pottery, china, paperweights, card games, perfume and even wallpaper-basically anything vintage with his image- can be worth hundreds of dollars. 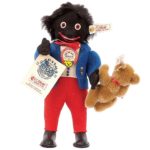 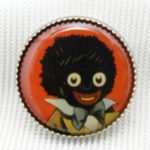 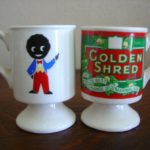 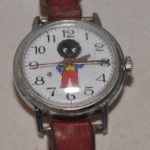 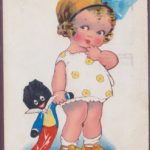 Good news for “Golly!” In 2016, a retired midwife and grandmother from Hampshire U.K,  Charlotte Nightingale,  started making and selling Gollies with the hopes of reclaiming the rag doll’s black heritage. Her goal was to have people re-think the absurd racial issues surrounding them and at the same time, raise money for African charities.

In closing, I leave with this quote: