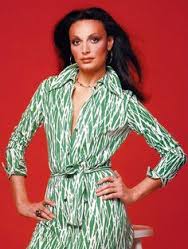 Diane Von Furstenberg (DVF brand) is a Belgian-American fashion designer-currently known as one of the world’s most successful fashion designers. best known for her eponymous label, and her iconic “Wrap Dress”-which was introduced in 1972. I  personally love the “Wrap Dress” style as it is a versatile dress for casual business attire with a touch of elegance.
She was born in Brussels, Belgian in 1946, attended several finishing schools, then met and married Prince Eduard Egon von Furstenberg- heir to the Fiat automobile fortune.
The von Fürstenbergs moved to New York City in late 1969, where Diane attempted to find interest garment manufacturers in her sample designs. Working during the early months of design out of the dining room of her Park Avenue, she found inspiration in the fashion lines of Bill Blass, Kenny Lane and by Diana Vreeland.
She became a powerful fashion icon in the 1970s. by acknowledging the needs of a growing number of career-minded women in that decade. By 1976,  she had sold 5 million of those fabulous wrap dresses.
Years later In 2014, the designer released another memoir, the empowerment-themed The Woman I Wanted to Be, and had a  reality TV show “House of DVF”- which was launched on E!, The series followed a group of young women competing to become von Fürstenberg’s brand ambassador.

Today, any of her fashions are sought after. Check out those closets at estate sales as her line of apparel, fashion accessories, and sewing patterns featuring her designs starting in the 1970’s- can fetch a pretty penny when selling online.
​
“When a woman becomes her own best friend life is easier.”
― Diane Von Furstenberg