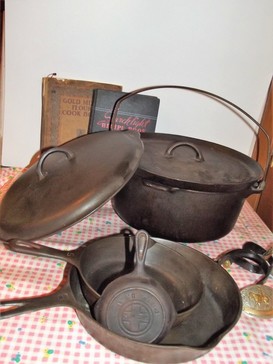 When hearing the name “Griswold,” the first thought that might enter your mind could be the well-known, National Lampoon Family Vacation movie character, whose name was Clark Griswold (played by actor/comedian Chevy Chase).
But Clark will have to take a back seat this time because this article, will be discussing the Selden-Griswold Manufacturing Company (GMC) associated with cast-iron household and restaurant equipment. GMC started in Erie, Pennsylvania in the year 1865, by Matthew Griswold and his cousins, the Selden brothers.
The company was well-known for manufacturing the oldest and best cast iron cookware in the country during the early 20th century.

If you happen to come across an old cast-iron skillet-or cast iron item-check the piece for the “Erie” or “Griswold” trademark on its underside. You may have found GOLD!
Did you know, a vintage large #13 (numbers denote the size of the skillet), cast iron skillet can sell for over $2,000!

“Wow Granny, fry me up some vittles in dat, dere skillet,” as Jethro Bodine might have said on the 1960’s TV hit sitcom The Beverly Hillbillies.

Why are specific antique Griswold, cast iron kitchen implements worth so much money?​
​Rarity, and condition of the cast iron piece. Additionally, they’ve been considered “mainstay” cookware for over a century by most cooking enthusiasts and chefs. They’re durable, versatile; and excellent for pan-frying, high-heat searing and baking. Not to mention, the old cast iron was made of a higher-quality grade of metal, verses, the materials used to make cast iron cookware today.
Even if you find a rusty cast iron skillet or Dutch oven-with who-knows-what crud caked on it-the piece can be cleaned and restored for usage, or for wanting to resell it for a profit.
​
Cleaning Tip: Never put cast iron cookware in the dishwasher. Just scrap off excess food crime with a wooden spoon, add boiling hot water in the pan with a little dish soap, let it soak for a minute or two, rinse and then wipe dry. Remember, the cast iron our great-grandparents purchased came unseasoned-but with everyday usage it became well-seasoned. Using seasoned, cast iron cookware, adds flavor to the food cooked in them, and helps prevent food from sticking to the surface when using high-heat. For information on how to season and clean a cast-iron piece; checkout the online website-ThePanman.com.

Dating Griswold Cooking Equipment
Dating Griswold cookware is very important for avid Griswold cast iron collectors.
The basic vintage Griswold trademark is easy to identify, but dating them requires a little research.
Most commonly found Griswold cookware trademarks featured a large cross inside a double circle with the word “Griswold” spread from the left side of the cross to the right-found on the underside of the cast iron piece.
Earlier cookware, dating from 1897-1920, featured a slant, cursive lettering inside the double circle. From 1919-1940, the lettering was changed to block-style. Around 1939, the Griswold logo was reduced in size with a smaller cross and lettering. The pre-1940’s smaller cast iron TM (trademark) isn’t as much of a treasure to Griswold collectors and antique dealers. Most coveted GMC, logo markings are the “ERIE” block lettering, Spider & Web logo, Diamond logo; the cursive/ slant “Griswold,” or block lettering with the large cross; and heat-rimmed cookware.

Griswold made hundreds of cast iron wares from 1865 to 1957-in various sizes. Each cooking implement had a pattern number as well as a separate size number. 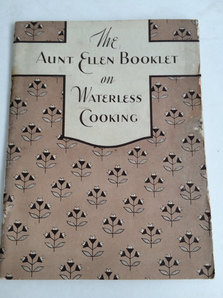 (Along some of my personal chicken frying tips.)
Start with 2-3 pounds of frying chicken (Don’t crowd chicken in the pan-make a few batches.)
1 ½ to 2 cups bacon and vegetable fat (Approximately 2 cups lard or shortening mixed with 1/4 cup bacon fat.)
Dust or shake chicken with flour, salt, and pepper (I use 1-cup flour, 1-tsp salt, a few dashes of onion salt, and 1 tsp pepper). (Let the chicken set a couple of minutes before cooking.)
Heat fat in Griswold Chicken Fryer/skillet, and fry chicken until tender and golden brown, from 10-15 minutes. (I cook chicken covered for 8 min, then remove lid for 8 minutes per each side.) Drain on absorbent paper towels. (Place on a wire rack for a crispier crust.)
Tip: To tenderize chicken, soak pieces in a covered bowl filled with three quarts of water and one tablespoon of salt, eight hours prior to cooking.