Who remembers these fun, bouncy ride-on toys manufactured by Hasbro Company in the 1980’s.  They were a real hit with toddlers.
The inch-worm itself measured approximately 3-foot long. Today, if you happen to find one while cleaning out a basement or garage, you could of found some serious cash. They sell on the internet for over $100 if in excellent lightly-used condition. 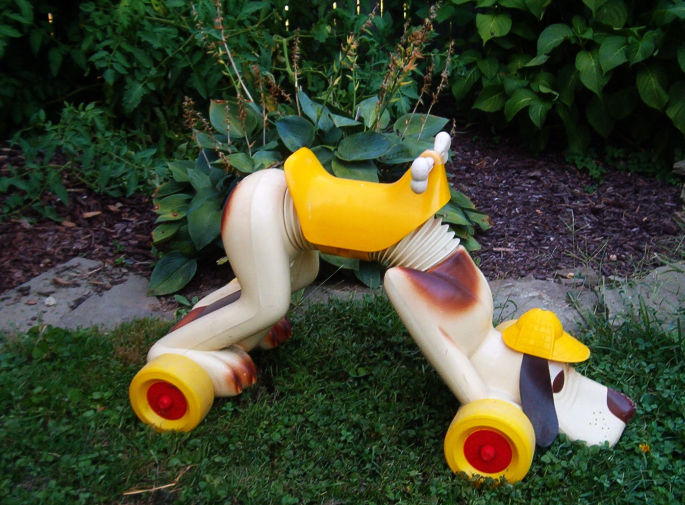 Hasbro created Romper Room’s “Digger Dog” in 1974-HTF in excellent condition, so they are just as valuable as the Inch-Worm.

In 1982, Hasbro (Playskool) came out with a plush stuffed toy with a vinyl head called the “Glo Worm.” This lovable, stuffed animal-and half soft-glow nightlight, had been a hit for almost three decades. Today, the original lime-green stuffed rubber-faced nightlight sells for over $75 on eBay. Considering the original cost was less than $15, their values have increased substantially.

Glo Worm was covered in a soft cloth body, which featured a zippered back opening where the appropriate-sized batteries could be added to the plastic mechanism. Glo Worm’s face lights up when his body is squeezed. Additionally. there were other Glo Worm friends manufactured: Glo Butterfly, and Glo Bug.  In 1986, Playskool released a number of miniature “Glo”-based toys that glowed and made of soft vinyl.

I found a Glo Worm at a garage sale from the early ’80s, and it still works! They sure don’t make them like they used to.

In 2005, the Glo products were discontinued. They were considered harmful to children if ingested because their vinyl was softened with the chemical compound called “phthalates” (Phthalates are used to soften plastics for flexibility.).

(Personally, I can’t see a child eating a Glo Worm?)