This is a 1967-68, Mattel  “Francie” doll.
She is Barbie’s mod cousin and Mattel introduced her in 1966.
The first Francie dolls (1966) didn’t feature twist and turn waistlines, but some had legs that would bend at the knee. They also featured long rooted eyelashes. After 1966 other features were added.
I received a Francie doll in 1968 for Christmas, such as the one featured here. I loved to dress her up in her mod clothing line. Unfortunately, when I was first married back in the 1970s, my husband accidentally sold my doll at a garage sale we were conducting. As the story goes; I had gone to get lunch for us and while I was away, my 6 -year-old daughter brought out my Barbie doll case complete with my original Barbie dolls and their original line of clothing from the ’60s; she gave them to my husband to sell. (He truly didn’t know the values Mattel Barbie dolls and outfits have.)  I was devastated…not to mention-the case with contents, sold for only $10. Someone sure got an awesome deal!!!
Moving on, any Barbie doll. or one of her friends /relatives from the 1960s, can be valuable if found in very good to excellent condition.
In 2005, while attending a doll auction in Lincoln. Ne, I won the auction for a Barbie doll case filled with vintage Barbie items from the 1960s. I had to pay $300 to get the case, so I was worried I had been caught up in “auction infused fever,” and had accidentally bid to much for the case.
Lucky for me, I found a Mattel Francie doll and some of her original clothing inside the case.
One outfit I found, was called “Miss Teenage Beauty.”
I decided to list it on eBay and was thrilled to see it sold for over $650. EUREKA!!
I recovered my original $300 invested, and had doubled my initial investment.
I believe I ended up making over $1200 on this case, so this was a mistake that turned out working good for me.
The original “Miss Teenage Beauty” Francie outfit today, can fetch over $230 (values have come down some). 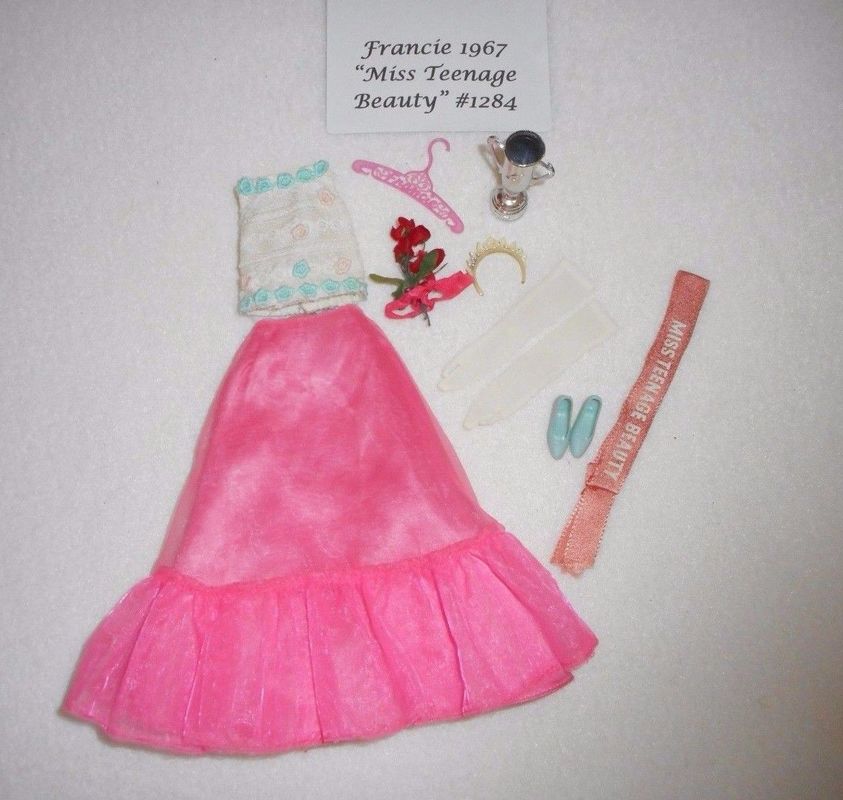 Don’t get confused with the Barbie Fan Club’s 2016 Francie Doll Reproduction wearing a “Miss Teenage Beauty” outfit-Check out the tags on the outfit. The old labels will look like the one shown here.