During the latter part of the 1960s, Saturday afternoon discotheque television shows, such as  “Where The Action Is,” Shindig and “Hullabaloo,” were popular teenie bopper shows.
We were living in Anchorage, Alaska at the time and were considered lower-middle class.
Mom and Dad really didn’t have enough money to buy me a pair of the coolest pair of knee-high boots, I had seen on display at the JC Penney’s Department Store. So, for my 12th birthday, they surprised me with a shorter pair of white leather boots (ankle height), with 1″ heels. 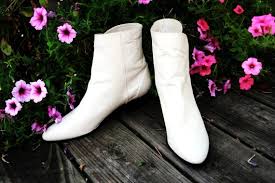 I was so thrilled to own such a cool pair, I couldn’t wait to go to school and show them off to my classmates.
Upon showing my friends my boots; in walks my bestfriend with a pair of the white leather knee-high go-go boots I had seen at the JC Penney’s store. I was surprised and asked her, “Wow,  how did you get these boots?” She said, “I told my parents you got a pair for your birthday, so they went out and bought me a pair.” Well happy for her, but my fancy boots didn’t seem so exciting to the girls in the classroom.
Oh well, the story has a good ending. I loved those boots and definitely wore them out. My friend-own owned the knee-highs even let me wear hers now and then.

A bit of history about go-go boots: The term “go-go boots” emerged from the popularity of discotheques. The first American discotheque was the Whisky a Go-Go, which opened in Hollywood, California, in 1963. At Whisky a Go-Go young women wearing miniskirts danced on platforms or in cages suspended high above the dance floor. They were called go-go dancers. Soon young women across the nation started to dress like them. French designer André Courreges (1923–) introduced what would become go-go boots in 1964. His white ankle-high boot featured a square toe and low, square heel and was worn with dresses hemmed three inches above the knee. It was not long until go-go dancers and then other fashionable young women were clad in variations of the Courreges boot.
They were made of leather, patent leather, or colored vinyl. Some were short with squared toes and heels.  Basically, the shorter the skirt, the taller and tighter the boot! They mostly had zip-up closures…later lace-ups.
Nancy Sinatra (1940–), the singer-daughter of celebrated singer-actor Frank Sinatra (1915–1998), was the queen of go-go boots. Her 1965 pop hit, “These Boots Are Made for Walkin’,” sold just under four million copies. Photographs and record album covers from the 1960s feature Sinatra wearing white go-go boots and matching white minidress, brown boots accompanying a daring, hip-hugging sweater, and an ensemble of red boots and matching red minidress.
Go-go boots, like go-go dancers, were just a fad. Despite the success of Sinatra’s song in 1965, that same year the go-go boot lost its fashion appeal. However, variations of go-go boots remained a part of young women’s wardrobes into the 1970s.
Credit:​http://www.encyclopedia.com/doc/1G2-3425500628.html
​