Although, pure silver market prices are down, that doesn’t stop these vintage charm bracelets from being quite valuable!
Leading the way, are the  intricately treasured heart charms created by Walter Lampl.
Walter Lampl was born into poverty in New York, but he eventually found interest in creating chain bracelets. By the 1920s, he became one of the most sought after craftsman, of  precious and costume jewelry pieces.  He began a “charmed” lifestyle so to say; shortly after when his mini- puff heart charm bracelets-which were very romantic (creations originally designed for his beloved wife, Sylvia),  mechanical and whimsical in nature. In the late 1930’s Walter was granted exquisite rights to create the souvenir charm for the New York World’s Fair Company. Hense, his jewelry business grew imminencely, and his creations were sold worldwide.
Walter Lampl’s Company is also famous for the “Bundles for Britain” box charm.
This highly collectable miniature box,  was sold in the U.S.A. during WWII, to raise funds for the British War Relief Society. It features windows on all four sides, peeking into the window, a tiny fragile silk Union Jack Flag. The lid is decorated with an enamelled crown and the words ‘BRITAIN DELIVERS THE GOODS’. Bundles for Britain Inc., is marked on its back. (see photo below)
Lampl’s famous puff enamel heart charms were created In the early 40s. Walter designed and patented a set of twelve exquisite enamelled heart charms- each representing a month of the year; decorated with the appropriate flower of the month, and birthday gemstone for that month.
Unfortunately, Walter Lampl passed away in 1945 after a massive heart attack, but his son, Walter Jr, continued the “The Lampl Company” until 1959 when the decision was made to close the business.

So, in the future if you are lucky enough to find these exquisite artsy, sterling silver charms, or any piece of jewelry with a maker’s mark of a “WL” in a shield; it can be very valuable and collectible. 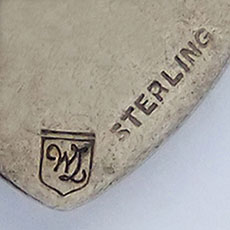