The Atomic Age (1950s-1960s), brought about dramatic changes to home decor.
Shapes of wall clocks were adopted from Atomic, or Nuclear based symbols (i.e. starburst, orbs, geometric shapes, sunburst), and these sleek wall, time pieces became the center of attention in any room. The mid-century styles replaced the basic traditional styles in home decor that were popular prior to the late 1940s.  Modernist decor became the new norm in the home and office. The iconic MCM designer, George Nelson, was a main contributor to this movement as he worked and designed clocks for the Howard Miller Clock Company.  George Nelson’s designed clocks became extremely popular, so other companies joined in with their mid-century wall and mantel clock versions. Company names, such as Westclox, Elgin, Seth Thomas, Welby,  Lux, Spartus  and many more, created some fabulous MCM clock designs.
Some of these clocks today, can sell for over $1,000, especially those designed by George Nelson.
As the CEO of an estate sales company, I see a lot of these clocks at estate sales, but most of the time, people don’t realize how much they are can be worth.
Just the other day, we checked out a possible future estate sale. While looking through the dirty garage, I spotted a beautiful sunburst clock hanging on the wall covered in cob webs. So sad! Even if the clock wasn’t working, it could be repaired considering how much it could be worth.
So, keep your eyes open for these MCM treasures! 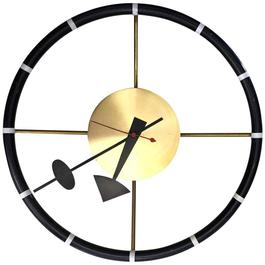 The wall clock below was the most important one to me during the 1960s. When it hit 3 p.m., it was time to go home! Yay!!
This is an industrial/school wall clock and they can fetch well over $200 if found in very good condition. 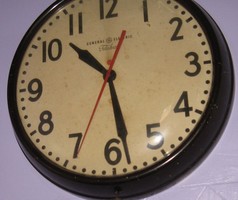