Not knowing much about it’s origins-as it wasn’t marked by the designer -I took a chance and paid $50 for it.

After some research online, I discovered it was at least 100 years old.

Bohemian/Czech (Bohemia became Czechoslovakia after WWI) garnet (a semi-precious gemstone) bracelets are highly sought-after for their rich, deep red beauty and healing properties. Not to mention: It is the birthstone for the month of January, and as a gift of love traditionally given for the 19th anniversary marriage.

During the late 1800’s thousands of Bohemian residents were employed with the  mining, cutting, polishing and mounting of garnet jewelry. It was a lucrative business for their country.

Did you know? Throughout the ages, garnets were sought-after for medicinal reasons. The stones have been thought to cure depression, avoid bad dreams, relieve liver-related diseases, inflammation issues; regulate the heart and blood, and for hemorrhages. For men, it keeps the reproductive system healthy, and good for keeping a healthy hormonal balance for women.

Additionally, the stones virtues have long thought to include success, fidelity, self-esteem, loyalty, energy, faith, truth, friendship, passion and more. (I think I should have kept the bracelet!)

FYI: Garnets come in other colors other than red. Hard-to-find green garnets are called demantoids, and are considered to be one of them most beautiful and expensive gems in existence by passing emeralds and even most diamonds.

The bracelet I found, sold online for over $250 because of its beauty, these inherited virtues, and its condition. The hundreds of faceted garnets on the bracelet are all pronged in securely, with all stones present. It featured blossom tiered clusters with rows of the semi-precious, red wine-shaded garnet stones.

The gold-tone metal link bracelet featured a safety chain (one reason I believed it could be valuable). 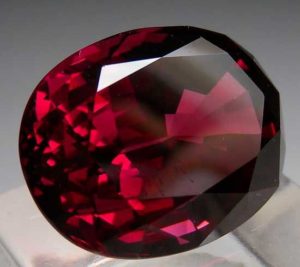