It all was started with a  lawsuit against the Sunshine Brewing Company-which operated out of Reading Pennsylvania back in the late 1960’s. Unfortunately, their was a dispute between Playboy Enterprises and the usage of the trademarked “Playmate” title, so it went to trial and Playboy Enterprises won.

As a result, all of the Play Mate beer cans were ordered destroyed per court order-They never made it to the liquor store shelves, or were marketed. Although, workers at the brewery were ordered to crush all the cans and destroy any “Playmate” labels and signs, around 100 cans were saved, some labels, and a couple of rare signs still exist today.
Their were two can variations created by the Sunshine Brewing Company. Both had the same graphics and color scheme, except one reads, “Beer” with the other one reading “Malt Liquor.” It is the “Beer” variation that is harder to find in good condition.
This is the main reason why this particular labeled beer can is so valuable, and sought-after by Breweriana collectors today. The Breweriana collecting arena is super popular today.

The can shown below had only a couple of dings in the can, but still an extremely rare find.

Yet another sought-after beer can is the 007 James Bond Special Blend Beer can.

This particular beer was produced in 1968 by the National Brewing Company of Baltimore, MD.

During the 1960s, with the release of 007 James Bond movies starring my favorite Bond man, Sean Connery; the “spy boom” was on. Spy comic books and TV series, such as I Spy, set the tone for manufacturing 007-related products, clothing and accessories. Why not a brand of beer featuring 007?  The beer can would feature attractive Bond-type women posed in front of  London backdrops. As 007 would say- “Ingenious, and useful too.” Unfortunately, the beer brand was pulled from the shelves when National Brewing Company found out they forgot to ask the estate of Ian Fleming about using their 007 trademark for a commercial product.  A 007 James Bond Special Blend beer can fetch over $500 online. 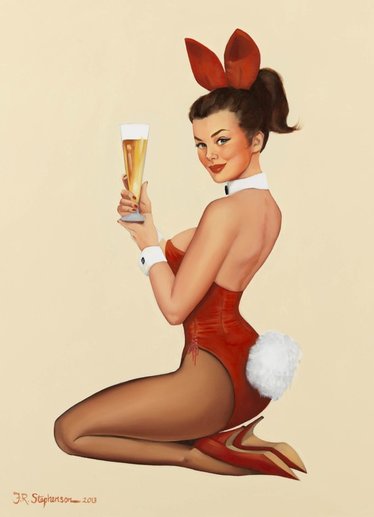 Lessons to be learned: Don’t mess around with the Hugh Hefner  or Ian Fleming dynasties!